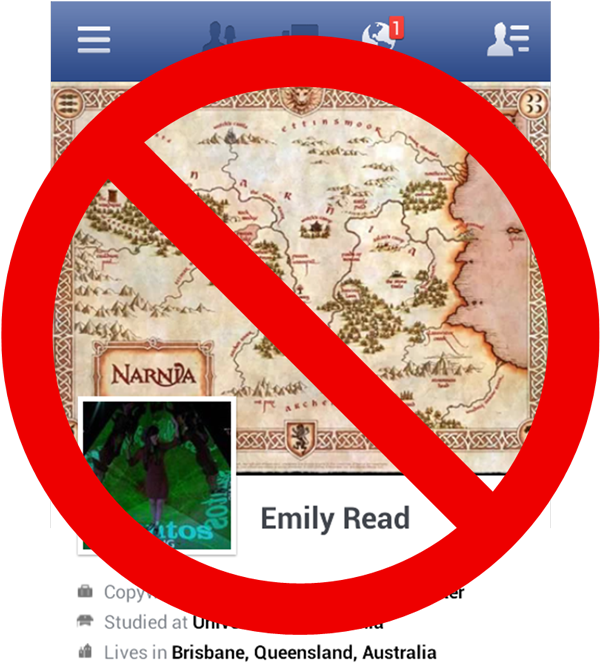 I didn’t get a new one until over a year later.

This is the Who, How, Why and What of my year without Facebook.

Warning: contains honesty, frankness, and a dash of vulnerability. May contain traces of a good story.

Why Did I Leave?

I was studying Honours in History full-time at the University of Tasmania. I also had four part-time jobs, and was volunteering in a full-on role as a youth group activity organiser at my local church. I told people I was deleting my Facebook because I needed to concentrate on my studies and other commitments.

But there were other reasons, too.

For starters, I didn’t like the new Timeline set-up (it has since improved). I wasn’t in the mood to accept another change that had been forced on me by Facebook, so I dug my heels in, and deleted my account the day the changes were rolled out to everyone.

Two of my best friends had recently deactivated their accounts. One lived in Queensland, the other in Tasmania. Despite this, we didn’t lose touch, or miss out on any important details in one another’s lives. This taught me that I didn’t actually need Facebook to keep up with the people I loved.

I’d also become Facebook “friends” with people I didn’t know well, or simply didn’t like. I didn’t want to share my life with people I barely knew, and I had several “friends” who regularly posted updates that drove me crazy. (Does that make me a bad person?) Un-friending individuals was a recipe for guilt. By getting rid of everyone, it wasn’t personal, meaning zero guilt for me. (A bit of a cop-out, I know.)

I didn’t really want things from 18-year-old Emily up there anymore. It’s not that I was an idiot 18-year-old. It’s just that in those early days, using Facebook was as much about finding out which Jane Austen character you were, or sending Pieces of Flair to your friends. I didn’t want that crap cluttering up my Facebook.

Most importantly, however, I was wasting a hell of a lot of time on there. A hell of a lot. Whenever I was bored, or had any sort of trouble completing a task I was carrying out, I would hop onto Facebook. If I had no notifications, I would start browsing. Browsing photos, browsing people, browsing pages. Often for a couple of hours at a time. I couldn’t be bothered mustering the self-control to stay on task and stay away. So I removed the choice for myself and deleted Facebook.

There were plenty of things about a Facebook-free life that I loved.

A Facebook-less life was great, but it wasn’t entirely perfect.

Why Did I Come Back?

I didn’t get a new Facebook account until a few weeks after I moved to Brisbane. It was over a year since I had deleted my old one.

The truth is that in this day and age, moving to a new place, it’s easier to make friends if you have Facebook. And I was ok with that.

I also wanted to keep up with the news more easily from my favourite people in Tasmania, and I needed it for my job. It’s pretty hard to manage a Facebook business page without Facebook, after all!

But after a year without Facebook, I had also learnt a lot of lessons about what I did and didn’t want to use Facebook for, and I was determined to stick to them.

Compared to last time, I actually don’t waste time on Facebook anymore. I don’t browse photos or people just for the sake of it. In fact, I browse the photos of newly-added friends so infrequently, that I actually offended a friend recently when he found out that I hadn’t “Facebook-stalked” his photos after adding him.

I still communicate meaningfully with my friends. Although I have Facebook, I don’t use it as the only means of staying in touch with people. I call my best friends, or send them a text message.

Nowadays, if I don’t want to add someone, I don’t. I used to feel guilty about not adding people, and so my friends list became cluttered with people whom I didn’t want to share my life with, or who annoyed me with their Facebook updates. This time, I don’t feel guilty. If I don’t want to be your Facebook friend, I won’t be. (Does this make me a bad person? Let me know in the comments below!)

Moral of the Story

So, what’s the moral of the story?

Well, being Facebook-less won’t kill you. If you find you’re wasting too much time online and need to have a Facebook sabbatical, go for it! You won’t regret it, and you can always come back.

I needed to take some time away from Facebook. And I’m so glad I did. I got on with life, and I learned some valuable lessons. But that was me. You might not need to. If you don’t, good on you. If you do, go for it!

Was deleting my Facebook a mistake? Would you ever do it? Don’t be a ninja blog reader – let me know your thoughts in the comments below!