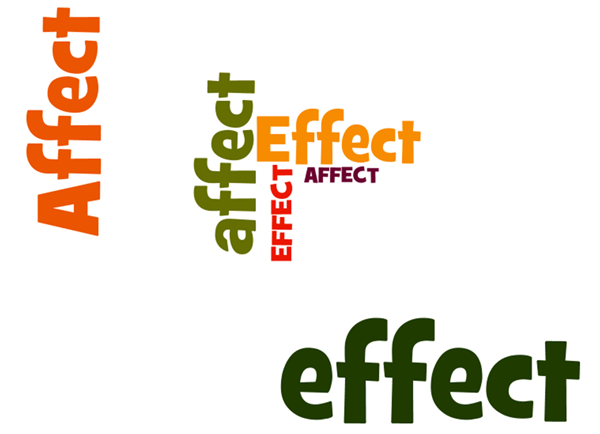 Do you know what a homophone is? (Clue: it has nothing to do with homosexuality or homogenised milk.)

Homophones are words which are pronounced the same as one another (i.e. they sound identical), but which mean different things, and are often spelt differently. People often confuse homophones with one another, such as when someone on Facebook says “your beautiful”, when what they actually mean is “you’re beautiful”.

But today’s homophone example is one that even copywriters have to pause and think about. And that is the classic dilemma of “affect” vs. “effect”.

Put simply, “affect” is a verb (or doing word), while “effect” is a noun (or thing). But what does that actually mean?

For instance, you could say that “dogs affect Sam because he’s allergic to them”, or “John’s words really affected Susan”. In both examples, something or someone (the dog or John) are influencing or impacting upon (doing something to) someone else (Sam or Susan).

Effect is the noun, which means it is a thing. An effect is usually a result.

For instance, you could say that “the effect of the dogs on Sam’s allergies was awful”, or “John’s words had a strong effect on Susan”. Can you see how these examples are different to the first ones?

Now it’s time to try and use “affect” and “effect” effectively! But if you’re writing something yourself, or helping a little human with some homework, and you’re still not quite sure which is which, no worries – add a question in the comments and I’ll be sure to get back to you.

We’ve covered “affect” vs. “effect”, but can you think of another homophone that bamboozles you? Let me know in the comments below!